Located minutes from the Las Vegas strip, the Atomic Testing Museum explores the chilling history of nuclear testing in the United States. The museum takes your on a journey into the most dubious chapter of Nevada's State history as it pertains to the testing of nuclear weapons at the Nevada Test Site.

The Atomic Testing Museum takes you through the history of nuclear testing, from World War II and the Manhattan Project to the current and future challenges of testing and disposal of the US immense nuclear stockpile.

Admission to Atomic Testing Museum Las Vegas
General Admission is $12 for adults ages 18 and over;
$9 for children ages 7 to 17
$9 for Nevada Residents
$9 for Seniors 65+
$9 for Military with ID
FREE - Children (6 & under)
FREE - Museum Members

The Nevada Test Site was located about 70 miles north of Las Vegas. Between 1951 and 1962, the 1,375-square-mile patch of Nevada desert was the stage for 121 above-the-ground atomic tests and 928 underground detonations from 1963 until a 1992 moratorium put an end to such tests.

What to expect at the Atomic Testing Museum

The Atomic Testing Museum's galleries is setup chronologically, starting with a brief exhibit about World War II, the Manhattan Project, and the 1945 bombings of Hiroshima and Nagasaki.

The Atomic Age Gallery details the earliest days of atomic testing. Visitors are guided through Interactive stations, educational short films, a wealth of pictures and paraphernalia, even information that could not be previously released for top-secret reasons is available for visitors to view.

One of the most popular exhibits is the Ground Zero Theater. A multi-sensory experience that stimulates an above-ground test and includes commentary from people who withnessed the test firsthand. 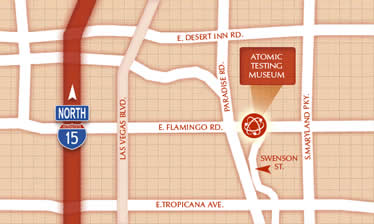