With a private entrance off of Las Vegas Blvd., the Four Seasons Hotel Las Vegas is the only luxury non-gaming Hotel on the Las Vegas Strip.

Situated at the south end of The Strip, this residential-style resort offers a tranquil oasis on the otherwise high-spirited Vegas strip.

Four Seasons Hotel Las Vegas is situated within the Mandalay Bay Hotel& Casino complex, yet the Hotel is completely independent, featuring its own private driveway, lobby and amenities. The 424 guest rooms, including 86 suites, are perched on the 35th to 39th floors of the Mandalay Bay tower, ensuring consistently excellent views. 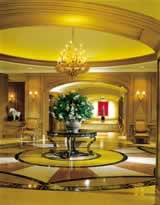 Location: On the Las Vegas Strip
Adjacent and with easy access to the Mandalay Bay Resort and Casino

Rooms at the Four Seasons are located on the 35th to 39th floors of the Mandalay Bay tower and accessed exclusively by Four Seasons express elevators.

Four Seasons 424 guest rooms, including 86 suites are high above the crowds. Set on the 35th to 39th floors of the Mandalay Bay tower and accessed exclusively by Four Seasons express elevators. The high position and floor-to-ceiling windows ensure unsurpassed vistas of the scenic mountains and desert, the pool and gardens, and the glittering Las Vegas Strip.

Charlie Palmer Steak
In the tradition of a great steakhouse, Charlie Palmer Steak is comfortable and spacious with an understated, clubby atmosphere. Located off the Hotel's main lobby, the restaurant is quickly establishing itself as one of the most innovative steakhouses in Las Vegas.

The Verandah
The Verandah offers an informal dining experience for breakfast, lunch and dinner with a degree of comfortable sophistication. An outdoor terrace and indoor dining provide the relaxed setting of a Mediterranean mansion overlooking the lush gardens of the Four Seasons pool.

Four Seasons Hotel nearby Attractions and things to do

Mandalay Place
A one-of-a-kind retail experience. Mandalay Place brings together over 40 unique shops and restaurants, many of which are not found anywhere else in Las Vegas.

Michael Jackson ONE
Cirque du Soleil brings back the sounds and magic of Michaels legacy at Mandalay Bay Las Vegas.

For a day of relaxation, Four Seasons’s luxurious spa will offer a complete menu of skin care, massage and hydrotherapy treatments to be enjoyed in its sixteen elegantly appointed treatment rooms. Enjoy a Relaxation Room for rejuvenating; a hydro tone thermal capsule tub with Vichy shower; a large steam room facility; and men's and women's locker rooms with a club-like setting.