No more stressing about parking fees or the outrageous price of gasoline. Las Vegas Game Day Express offers a nonstop transit service from various locations throughout the valley to the Allegiant Stadium for just $2 each way or $4 roundtrip.

You must have exact fare to ride the Game Day Express Bus. Driver cannot make change. A $4 roundtrip "Game Day Pass" can also be purchased through the rideRTC app, transit and Uber apps. (Your Game Day Pass can be purchased up to seven days before a home game.)

For the Los Angeles Chargers game which starts at 5.20 p.m. and for which gates open at 2 p.m., Game Day Express service begins at 1:30 p.m. and runs every 30 minutes with the last bus departing for Allegiant Stadium at 4 p.m.

It is highly recommended to arrive at least 3 hours before Kickoff. (stop by the Bud Light Beer Garden if you need to kill some time)

2 Fare to ride the Las Vegas Raiders Game Day Express Bus is just $2 each way or $4 roundtrip. Exact cash fare of $2 each way is needed or passes can be purchased in advance via the rideRTC app.

3 The service started on Saturday, August 14, during the Raider's first preseason game and will continue for the rest of the regular season.

4 The first bus is set to depart 30 minutes before the gates open at the Allegiant Stadium. (this is approximately three hours before kick-off). Game Day Express service will then run approximately 30 minutes from each pick-up location.

5The service will run every 30 minutes from each route, with the last bus taking off about an hour before the start of the game.

Looking for the ultimate tailgating experience before the Las Vegas Raiders and UNLV football games, the Bud Light Beer Garden is your answer. Located right on The Strip and within walking distance of the Allegiant stadium, Bud Light Beer Garden is the place to be 4 hours before all Raiders and UNLV home games as well as select sports and entertainment events at Allegiant Stadium.

Plan ahead and stop in on game days to celebrate with food, live DJ entertainment, interactive football challenges and much more. The Bud Light Beer Garden is FREE and open to the public.

Beginning on September 13, 2021, all Raiders home game attendees ages 12 and over must provide proof of vaccination to enter Allegiant Stadium.

Follow this link for instructions on what to do.

It is highly recommended to arrive at least 3 hours before Kickoff. 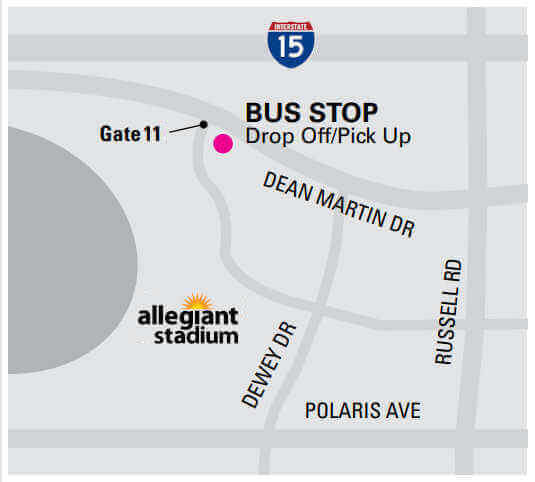