A trip to the Vegas strip or downtown became easier and faster than ever before. All thanks to the state-of-the-art Las Vegas Strip & Downtown Express. Designed and built with RTC’s vision of providing a safe, convenient and effective regional transportation system that enhanced mobility and air quality for residents and visitors to Las Vegas.

Note: Children 5 years and younger ride free and must be accompanied by an adult.

Strip & Downtown Express passes are validated at the time of issue when it is purchased from a Ticket Vending Machine (TVM) to ensure the pass is valid when boarding the SDX bus. That means a 24 hour All Access Pass is valid 24 hours from time of purchase.

Do you know ...
RTC is offering free rides for veterans on Veterans Day - November 11
Those who have served or are currently serving in the U.S. Armed Forces may ride all 39 RTC transit routes for free from 12:01 a.m. to 11:59 p.m. on Veterans Day. To ride, service members simply need to present the bus driver with their military or veterans identification card from any state when boarding.

Deuce - Deuce on the Strip 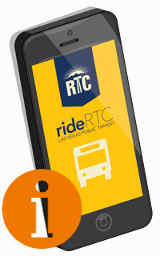 The Strip & Downtown Express (SDX) route runs approximately every 15 minutes and operates daily from 9 a.m. to Midnight. This service does not operate Midnight to 9 a.m. Use Deuce instead.

Strip & Downtown Express service will start at 7 a.m. on days with major conventions at the Las Vegas Convention Center.

Note: The RTC will provide free rides on all of its 39 fixed routes from 6 p.m. on New Year's Eve to 9 a.m. on New Year's Day in addition to offering extended service hours for several routes.

Ticket Now is a pay before boarding ticketing system that speeds up the boarding process by allowing passengers to purchase fares at Ticket Vending Machines (TVMs) located at transit stops. See the map above for locations of TVM's

At ticket vending machines (TVM) you can purchase a one way pass, day passes or 30-day passes.

Note: Fares must be purchased at TVMs before boarding premium service routes.

Points of interest when riding the Strip & Downtown Express

1) Route number of the bus you were riding and bus number if possible;
2) Date and time you lost the item; and
3) A detailed description of the item.

All lost and found items, including bicycles, left on transit vehicles may be picked up only at the
South Strip Transfer Terminal, located at 6675 S. Gilespie Street. Items can be claimed only
during the customer service booth hours of 8 a.m. - 4:30 p.m., weekdays. All items found
will be held for 15 days.

From Las Vegas Blvd take the southbound Strip & Downtown Express (SDX) to the South Strip Transfer Terminal (SSTT). At the SSTT, take bus Route 217 westbound. The stop for Silverton is located on the hotel property.

From Las Vegas Blvd take the southbound Strip & Downtown Express (SDX) to the South Strip Transfer Terminal (SSTT). At the SSTT, take bus Route 117 , which will drop off across from the South Point. The return pick-up bus stop is located on the South Point property, just south of the Valet area.

Other ways to Get Around Las Vegas

If you plan to visit Off-the-Strip Las Vegas hotels by bus, here is a list of hotels with their corresponding bus routes. Las Vegas RTC Bus Routes